There's a peculiar joy in creating a fictional character from scratch, coming to terms with their personality, their quirks and foibles, the things in their past that define who and why they have evolved. More than that, there is a joy in becoming that character, discovering how this person you've crafted holds up within a plot. And that is the magic of Dungeons & Dragons. Organic storytelling, role-playing, an immersive and interactive narrative that brings with a camaraderie unique to gamers. And if you're lucky, the gamers bring with them beer and pizza.

I've never used this blog as a platform for creative writing before, but why not? I use it for everything else, and You People keep reading it. Allow me to introduce you to Damian Jakobi of The Aundairian Dragoons, a soldier, a scholar, and a lover of good, dark Stout (like myself).
(Unashamed references have been made to Indiana Jones, Daniel Jackson, and Captain Diego Alatriste y Tenorio.) 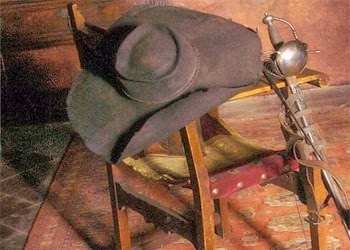 It was a long war.Granted, Damian Jakobi only had to fight through the last few bloody years of it, but it was enough. They were the frontliners, scouts, paving the way to war for The Knights Arcane. Never had there been a more thrilling time to be young and dangerous, trained in secret arts of alchemy and steeped in a nationalism born of war. Light and fast, mounted on the best horses House Vadalis had to offer the war effort, a group of young men hand-picked from The Academy for wits as quick as their blades.They were fearless, to a man. At the head of their column rode Hardan D’Tharashk, a stoic young noble schooled in scout-craft by the best of his House. Not all of them were noble-born. Jakobi’s father had been a tailor before Fairhaven was set ablaze. Diego the Miller’s Son was the fastest rapier Damian ever knew. They dubbed Damian “Jack”, on account of his name and his reputation as a Jack-of-all-Trades. If one could be taught to be canny, then Jack was a masterclass in it. He had quick fingers from a childhood perched on a stool in his father’s shop; hadn’t dropped a stitch since he was six. Jack’s mother was housekeep to a librarian at the University; she used to bring him back books discarded from the collections, tattered pamphlets full of obscure legal history, or maps with legends in languages none of them could recognize. Jack drank it all in. He loved secrets, knowing things that others would be envious of if they knew he knew, but they never would, and that made it all the sweeter.But his love of secrets landed Jack on the frontlines of a war he wished he’d never known, and when it was over he did his best to leave it all behind him. He returned to Fairhaven where he dove back into his studies with a voracious thirst to understand the world he’d seen torn apart. The Last War had been cataclysmic, but it was not the End. History, he felt, would have the last word yet, and when it did it those who held The Past would hold The Future.The post-war years drifted by. Jack found himself Head of Archaeological Endeavours at The Univerity of Wynarn, making frequent trips to study giant ruins in Xen’Drik or to the edges of the Mournland, riding the edges of the fog-bound plains in search of…answers. But the larger part of his life was teaching, standing in oak-paneled rooms to pontificate on the mysteries of the past. Hardan would show up at the end of the day with some newly formulated quip about how academic life was making Jack go soft, and then they’d go in search of beer. Hardan would bitch about the Fairhaven Watch salary, and Jack would explain some new development in Warforged psychology, each talking while the other had his mug to his face. To an outsider they made a strange pair, the Watchman and the Scholar, until the lamps started burning low and the seventh round was toasted with a quiet clink to the glory days, and they started telling stories. And then it all made sense.And so, when Hardan came around one day with nothing to say about the rust building up on Jack’s rapier hilt, and when after two rounds Hardan pulled out a roll of parchment stamped with the seal of The Wayfinder Foundation and tossed it across the table, Jack didn’t really think twice. This was the Orb of Merrix, Merrix D’Cannith, and it was about time for a sabbatical…wasn’t it? “You could surely use the brains.”, Jack said. So it was settled.Xen’Drik.


This character was created to fit the Eberron setting for D&D; if you're at all interested I encourage you dig further into the history and cultures of Eberron. It's a glorious Sword & Sorcery stew of wars, dragons, gods, and heroes ranging from Epic Romance to Fantasy Noir.
http://eberron.wikia.com/wiki/Eberron
Posted by Unknown at 15:37