I had one of those mornings today that felt like it had great narrative cohesion. You know the sort. In this instance, the feeling was brought about by an email I received from Mimi Pond at the precise moment that my order of coffee, hashbrowns, and eggs arrived. 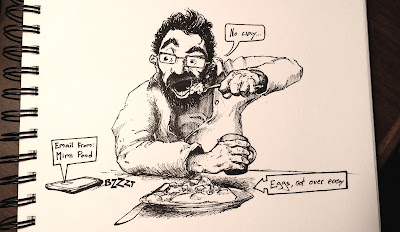 Mimi was dropping me a line to alert me to the existence of a crowdfunding campaign for a new humour magazine, The American Bystander, being run on Kickstarter by Mike Gerber (The New Yorker, The New York Times, SNL). Quite frankly, it looks great. It helps that the project is being put together by a handful of old-guard humour writers who have seen print humour rise and fall over the years and taken a good long look at what works and what doesn't. They've put together a solid-looking editorial model: no advertising impinging on their editorial freedom, a diverse crowd of established and emerging writers, and fair compensation for their contributors (none of that "We'll pay you in Exposure!" bullshit). Mimi happens to be one of those contributors, and from what she tells me and what I'm reading this magazine will collect folks who have lent their voices to SNL, The Simpsons, Monty Python, National Lampoon, and some other chuckle-worthy corners of our culture. The campaign has 11 days left in it, and I'd love to see it hit a couple more stretch goals before it runs its course (particularly because that would include the chance to submit a cover illustration for the thing). I've pitched in a bit so that people can be funny in print; head on over there and do the same!
Posted by Unknown at 20:22 1 comment: