May There Be A Road

There are times in life when you feel suffocated. Or at least, there are times in my life when I feel like that, where it seems that I need to be somewhere less structured, more wild, somewhere...else. Luckily, I have friends with those same feelings, and so sometime this afternoon we're loading up my '89 GMC and heading south. San Fran if we can make it, wherever else the road leads us if we can't. "Yol Bolsun!"; may there be a road, in the words of Louis L'Amour, a man who perhaps understood the open road better than any. May there always be a road  between you and where you are meant to be. I doubt that I'm meant to be in San Francisco this weekend in any spiritual sense, but that where I'm headed. Keep 'er between the lines and greasy side down. Yol Bolsun!
Posted by Unknown at 09:16 No comments:

What You Make of It

I've heard it said (as have we all, at some point, I'm sure) that the world is what you make of it. Which it really, really isn't. Not anymore. We adults know that world is what it is, and it will continuie to be so, and so we must learn to survive within it and adapt. Some of us decide to just go with the flow; others decide to fight that flow, in an effort to not become some sort of mindless capitalist zombie. But children...well, children have it good these days. Their worlds truly are what they make of them, absolutely anything that exists in the mind of a child, which leaves rather a lot of options open. I miss those days. I miss the times when I walked out my front door into the snow-covered battlefields of Middle Earth, or clambered over the back fence, cap gun in hand, and dropped into the gunfire-laced jungles of my mind. In my back alley, I was Indiana Jones, or James Bond, or Aragorn, or whoever. Now I'm pushing twenty-one, and so much of that is gone. People wonder why I'm such a geek, why I would bother with comics and most of all, why something like roleplaying would be so important to me. Why? Because sitting around a table rolling dice with a bunch of guys and pretending to be a Half-Elf ranger or a gunslinging smuggler in the Old Republic is a last ditch attempt to hold onto the childhood wonder that is Imagination. Children are the best storytellers, becuase they never run out of ideas. I don't want to lose that. And so I game.

And on that note, I'll toss up the preliminary sketch for a screenprint I'm working through titled Return to Imagination. The final print won't look anything like this (and I'll post it when I'm done, no worries), but I rather like this image on its own. Sort of an unintentional homage to Bill Watterson, I guess. And if you don't know who that is, get on it. 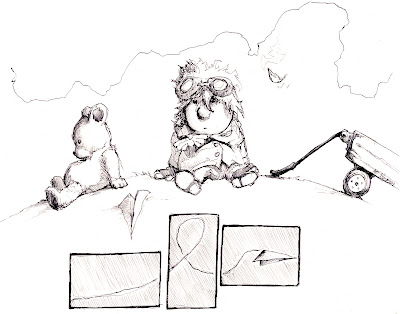 "My character has the highest charisma score! I'm a natural leader."

"One: "charisma" does not equal "knowing what the hell you are doing". Two: You can't be our leader; you have no pants."

- Marcus and Chuck, "Chainmail Bikini"
Posted by Unknown at 16:30 No comments:

I remember a prof telling me in my first year of art school that he knew my type: I was the kind of student he'd been weaning off dragons for his entire career. All these kids showed up to art school, he said, with this penchant for drawing scaly, fire-breathing monsters and his job was to snap us out of it. I was just another Lord of the Rings who was going to learn the merits of true art. I believe I wished him good luck, and kept drawing.

And so here I am nearly three years later...still drawing dragons. That's the trouble: if a kid who with a pencil and a love of fantasy decides he's gonna make his living as an illustrator, there are certain things you'll never break him of. Like dragons. They're just so versatile, you know? Big and scary, murderous, practically made of teeth if you want them to be, but with the potential to be cute and just a little dysfunctional (thinking specifically of the dragons Paul Kidby draws for the Discworld novels). So yeah; I figure I'll draw dragons until the end of my days. Like these ones, which were originally mountain goat sketches by Robert Bateman adorning the cover of my sketchbook, but were deemed lacking in character and originality. So now they're dragons. 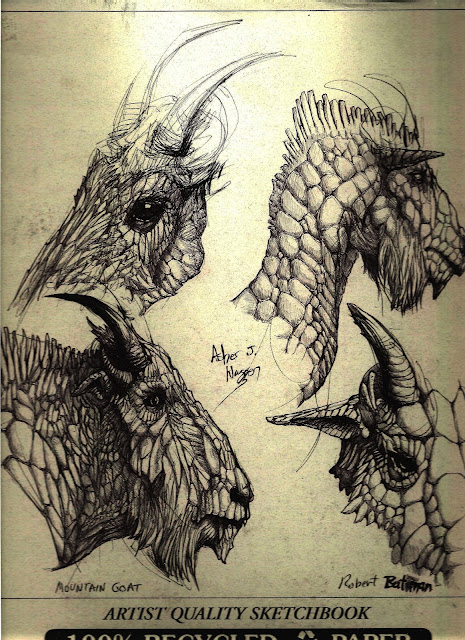 The goal here was to post a sketch a day, something that's successfully made the journey from my imagination through my pen to the page, but that hasn't really happened. Art school, y'know? So while you wait for the next one I'll send to a man I greatly admire, a certain Skottie Young [http://skottieyoung.tumblr.com/]. As storytellers go, he's among the finest. Enjoy.


"Pinfeathers and gollyfluff!"
-Archimedes (the owl)
Posted by Unknown at 10:45 No comments: