How I was inspired by Art - A Story

The way I see it, there are a lot of different ways to tell a story. But that's old news.

This goes beyond the statement, "There are a lot of stories to be told", which is equally true and an entirely different conundrum for the narrative artist, be they writer, sculptor, painter, or cartoonist. Picking which story to tell isn't even half the battle. It might be a third of the battle, potentially a quarter. The thing is, after you have your story chosen you have to decide how you're going to tell that story. This stage is half the battle, you know, give or take. For me, this half of the battle has been the focus of the past three months. I blame Art Spiegelman.

Seeing Spiegelman's retrospective at the Vancouver Art Gallery this past summer changed something in the way I think about the comics production process. His work filled an entire floor of the gallery gallery building with cut-and-pasted montages of wackily painted caricatures from his RAW days, sobering inked pages from Maus, and a few gorgeously composed pages that were more than a series of panels, they were a single, cohesive masterwork appearing as a sequence of images bleeding into, through, and over each other in flawless harmony. I wish I could remember where those were from.

It sparked a paradigm shift. Drawing has ceased to be the sole method; ink has ceased to be the sole medium. My brain has started to roam around an open realm of ideas and media searching for alternate ways to make a comic, picking through piles of previously discarded materials until finds something usable and then dropping it back into my consciousness, spawning spontaneous and unexpected project ideas. for example, waking up one morning to a thought: "I should make a comic set entirely on sofas.", accompanied by a fully formed plan of a photo collage process with figures drawn into the black & white photo settings with conte crayon and brush pens. Granted, these ideas are still taking baby steps. They may be innovative to me, but they are a far cry from being drastic leaps in progress for the medium. I'm not not pushing any boundaries when I write my text on card-stock and glue in over a drawing instead of drawing a speech bubble into the panel. All I'm doing is pushing myself a little further out of my box of naivety, and that's bloody good enough for me. 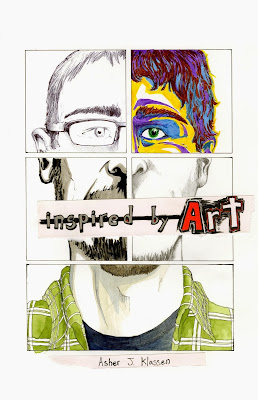