Community is crucial to survival. Take that staement to its most literal connotation, and it reinforces some of what we know about early humans: that in order to survive we banded together in tribes and hunting parties, and eventually built cities and civilizations. Personally, I'm lost without community; I thrive in the presence of my friends and family. Also, as a storyteller (which all illustrators are, at their core), I appreciate community for the way it births narrative simply by existing. All stories come out of community, interaction, culture, experience, written through the simple act of being around other people. The best stories unite people, make them cry and laugh together. Community and the art of storytelling are forever and irrevocably linked to one another.

There are moments in life that reveal to you in one fell swoop just how important the people around you really are. Like when one morning you discover that someone you thought would be there, if not forever, at least for a long while yet, is no longer a part of your life. Suddenly there's a hole in there your life. You've got this exit wound that bleeding all over the floor and if you were alone you'd be doomed. But you aren't. You have a community, and they'll patch you up; whether it's going out for coffee, or a beer, or rocking a four-player splitscreen Halo Reach session with copious amounts of ice cream, one way or another your community will help you heal. It'd be nice if we could just make like the phoenix of myth and rise from the ashes every time we die. Wouldn't that be easy? No, we are creatures of far more complex constitution; for us there's a healing process. But we've got something the phoenix can't compete with: every time we heal, we become a little stronger. We change, we're different, and we've got some scars, but we come out of our wounds stronger than we were before.

In case you were wondering, I'm dealing with one of those exit wounds. And I've had phoenixes on my mind lately. Like the one below; it's a university phoenix, rising from the ashes of a campus ashtray, haggard, blackened, and looking a little carcinogenic. Today's lesson: don't smoke, it's bad for mythology. 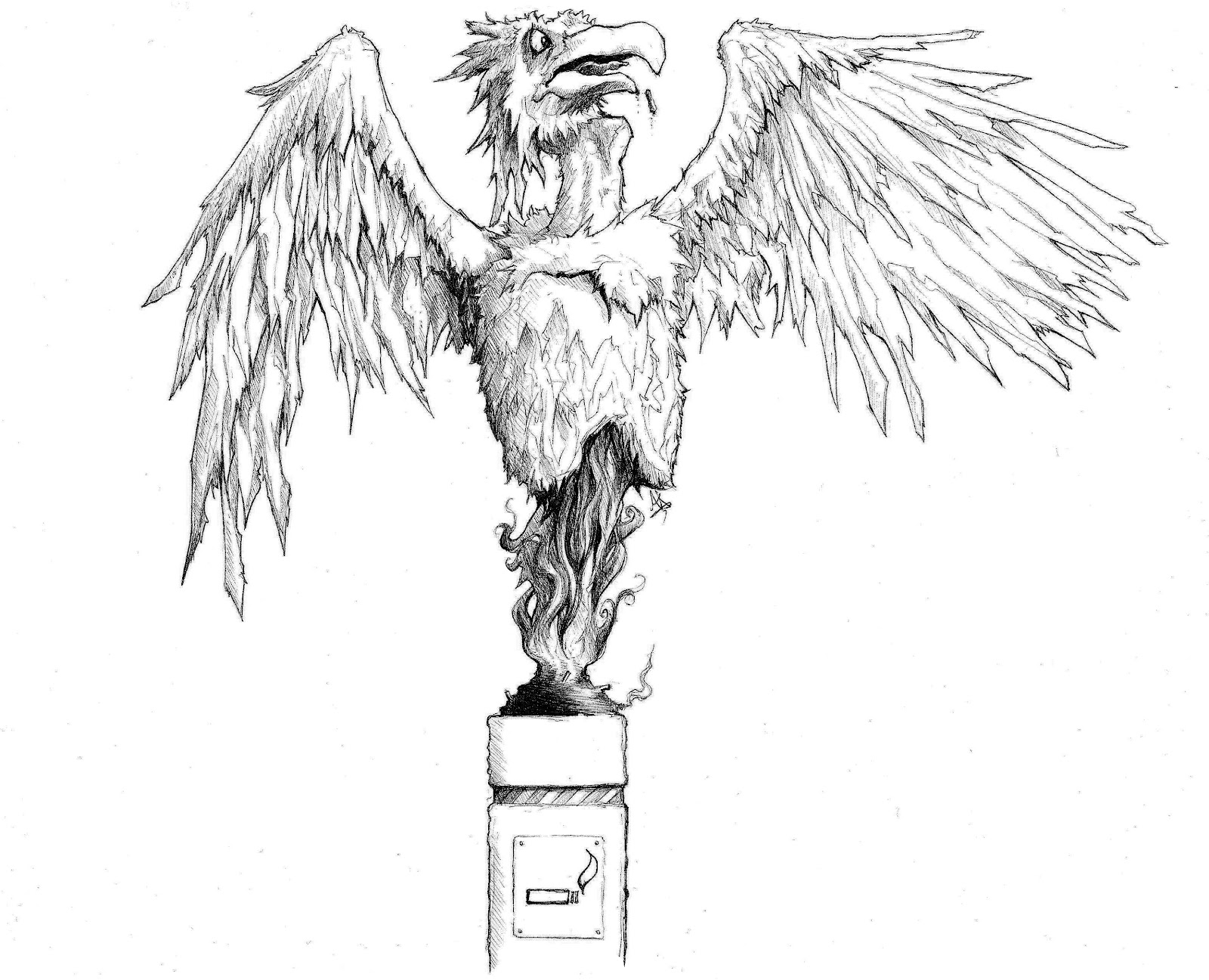 "Why do we fall, Bruce? So that we can learn to pick ourselves up."
- Thomas Wayne, Batman Begins
Posted by Unknown at 10:18 No comments:

Farewell to That Which You Wish You Knew

I wonder (and this is not the first time) if there is a word that denotes a sort of blend of regret and nostalgia, when you're missing something that was part of a life you've left behind but you miss it because you didn't know it that well, and now that it's gone you wish you'd gotten to know it better. That feeling, whatever we may come to call it, shows up sometimes when I find myself thinking of some older lady or gent who passed away when I was a kid, and I wish they were still around, 'cause I'd have like to talk to them. It's a funny feeling, and it hit me again this morning. An old hotel in my hometown burned to the ground last night, and as I read the numerous wall posts and statuses about the fire one in particular jumped out at me. One of my old art teachers had written a sort of goodbye to the building. She'd spent hours painting the historical facade, evening with friends in the pub downstairs...she loved that old building. And I found myself wishing I'd known it too. I grew up in that town, spent 18 years of my life there, and never once set foot inside that old hotel. I guess I'll never get that chance. Sounds like a country song...

What does an illustrator with a song stuck in his head do? Draws it. Obviously. I was walking around three days ago with "Never Got Off the Ground" by Allison Krauss running through my mind, and when I couldn't take it any more (the song is too beautiful, it was driving me mad) I walked into the nearest Timmy's, sat down, and started sketching. It's not much, and it's definitely not perfect, but it's something.


I've found myself rediscovering drawing these last few days. Being a working man over the summer doesn't leave me with much energy or time left over for me to sit down with my sketchbook, but with school back in full swing the creative juices are flowing again. I'm sure I'm not the only artist who feels this at times: every once in a while I find myself at a point where art feels too much like work, and I worry that I'll lose the joy it gives me. Three weeks later I pick up a pencil or a brush or a pen again and realize...this is just way too much fun. That passion never dies.

That said, there's also a point at which one must buckle down and get a lot of stuff down on paper for a deadline. In fact, I should probably be in the studio doing that instead of typing this. The three biggest distractions for me currently: J.J. Abrams' Fringe, Batman: Arkham City, and comics. My free time is two-thirds Batman...hence the fact that I'm going to sign off right now and head to the studio, where I have work to do on a very Batman-related bit of screenprinting. I'll leave you with that. Cheers!

There's a place on British Columbia's west coast where the beauty of the world seem to have no limit: mountains rise straight and sheer from the ocean's surface, and where the mountains give way to thickly forested valleys cinnamon-coloured grizzlies prowl the water's edge looking for salmon. I just returned from that place, and I find myself already thinking, hoping, dreaming of a return trip. Last week was spent sailing around names like Toba Inlet, Pendrell Sound, and Waddington Channel, dropping anchor for the night in Squirrel Cove and Tenedos Bay. I'm thoroughly convinced that I've just left behind the most spectacularly breathtaking place on earth. Which, I guess, makes the rest of this province only really, really beautiful... 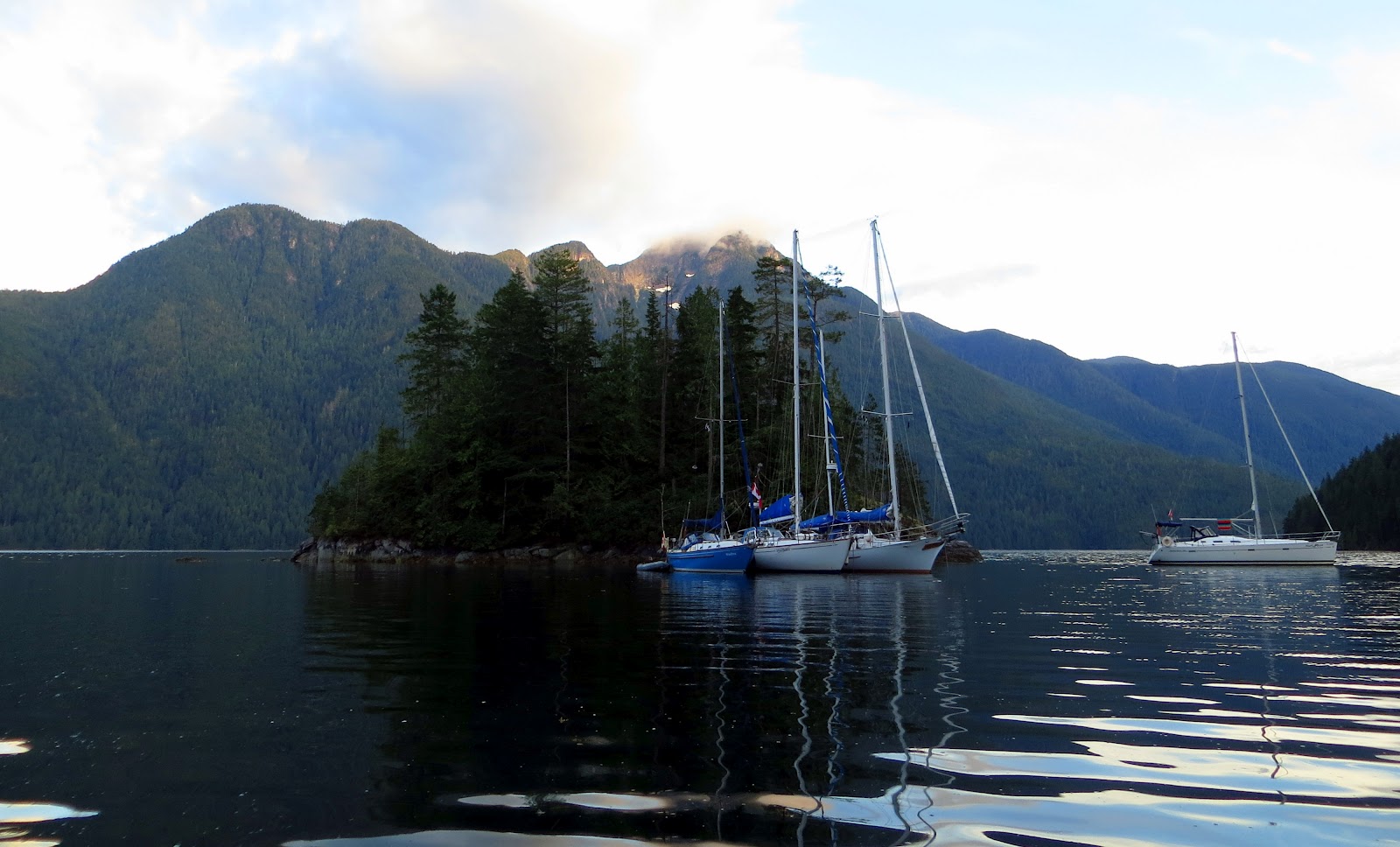 I was able to read through two amazing novels over the course of that week, a great achievement for a guy who really read nothing but comics all summer. After having a friend last year recommend and loan it to me, I read Gioconda Belli's Infinity In The Palm Of Her Hand, and thoroughly enjoyed it. For anyone familiar with the story of Adam and Eve and the traditional Jewish teachings of midrash, I would recommend this book; Belli's interpretation of the Genesis narrative is captivating. The second novel I conquered has been a long time coming. After ten years of writing it into every "to-read" list I've ever compiled, I finally sat down and read Neil Gaiman's American Gods cover to cover. It blew my mind. Part of that, I think, I can blame on the scenery; reading a novel chock full of mythology on a sailboat moving through rocky channels and cloud-shrouded mountain ranges, well, it'll do funny things to your mind. In a nutshell, the book is a masterpiece, an inspiration, and a not-so-subtle nudge in the ribs that maybe I should pick up his Sandman series. Thus surfaces the ever-present dilemma: comics, or tuition... 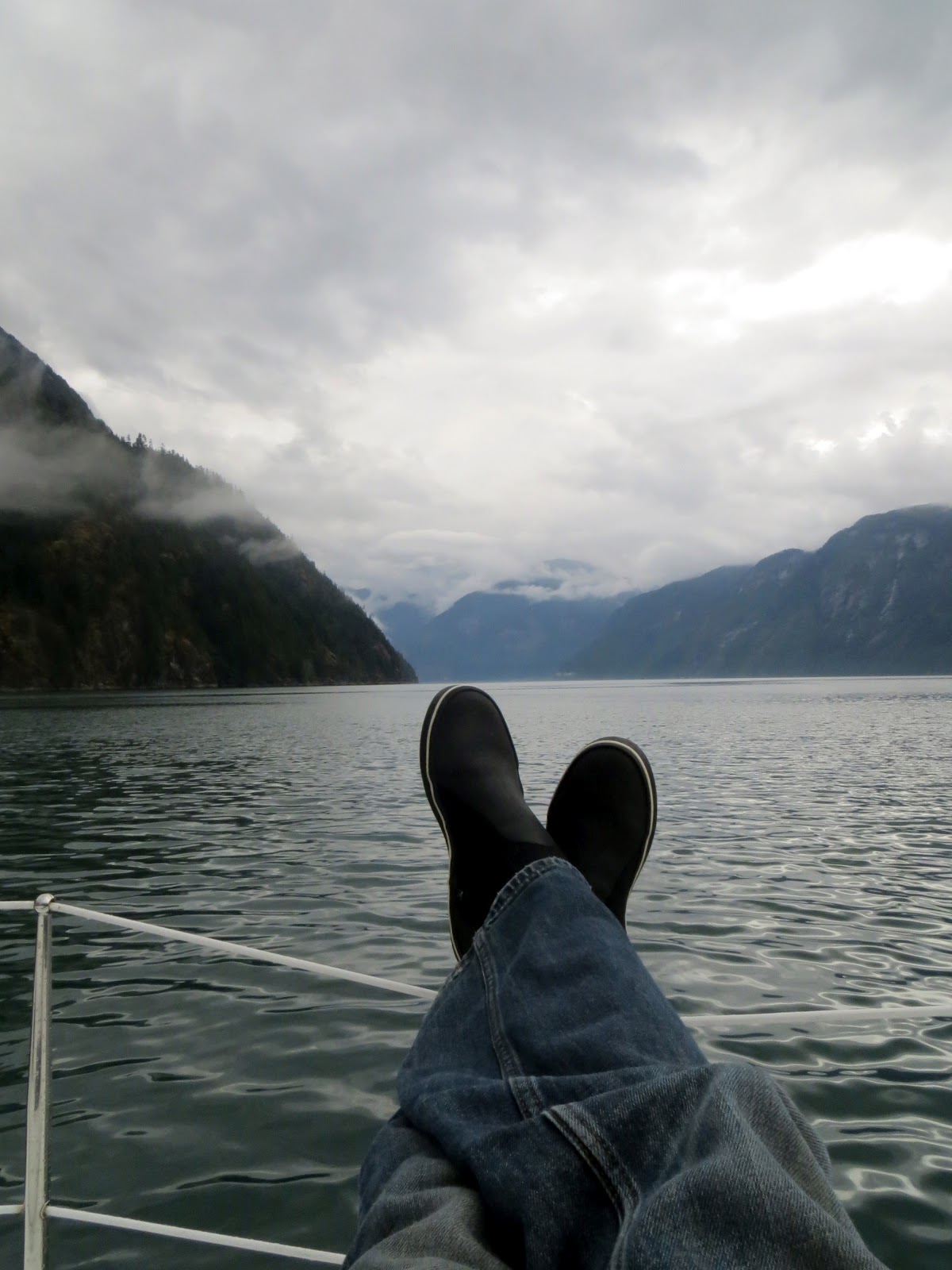 And after all that, I'm back in the world (to borrow a phrase from Mal Reynolds); a new school year looms ahead of me, a breathtaking and inspirational sailing trip lies behind me. Frankly, not bad positioning for the beginning of September. I'll make a point of setting time aside to keep this bit of writing relatively current, and with a little luck and a lot of dedication the pens and brushes and I will become ever more familiar with each other and I'll be able to fill these screens with art as well. Here goes.

Oh, and I drew a picture of Gollum. 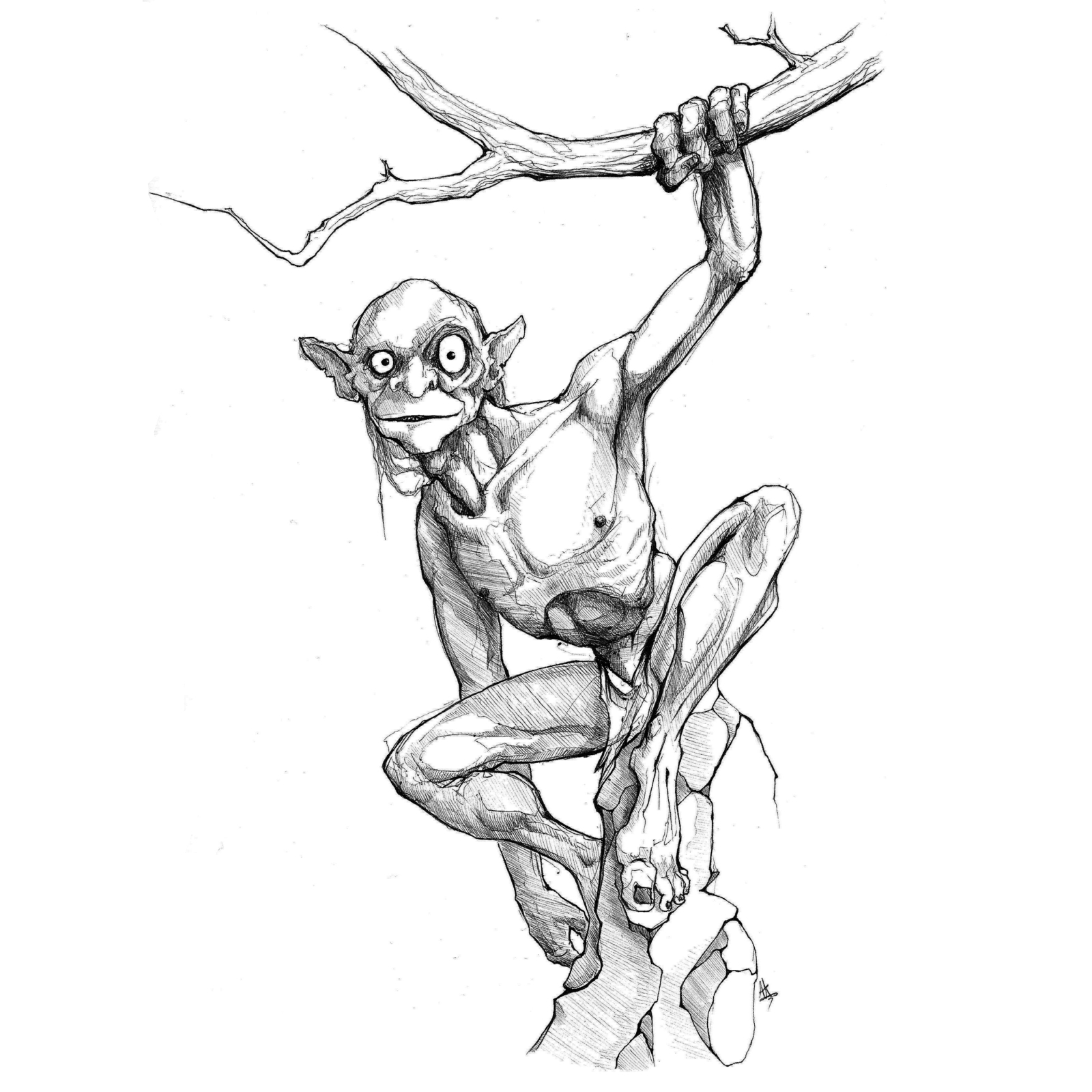 "The cure for anything is salt water - sweat, tears, or the sea."
-Isak Dinesen
Posted by Unknown at 21:24 No comments: