I am not a conceptual artist. Not generally. In fact I have spent the last two years of my educational career despising the idea of conceptual art; my adherence to what I deemed the importance of technical skill far outweighed any potential respect I could've had for art that is almost purely idea and minimally technical. This changed over the weekend, as things tend to do under adverse conditions. Faced with a ridiculous project criteria I forcibly smothered my disdain and created a more conceptual piece than I ever would have thought possible. 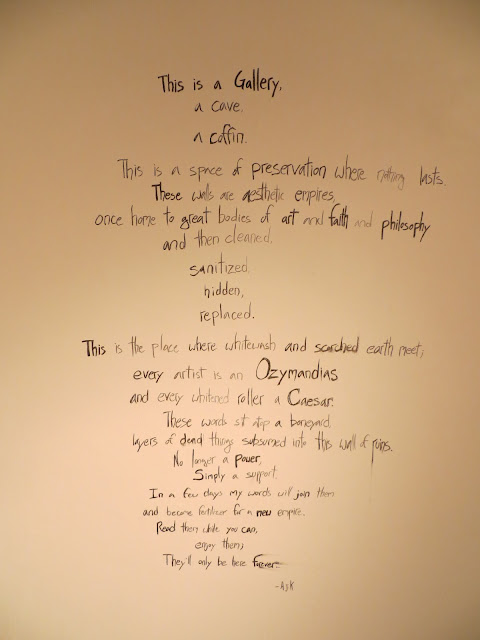 The project assigned to us was to create a piece of "ephemeral" sculpture, a three-dimensional piece of work with a temporal quality, ideally something that would fade or disintegrate over time. The kicker was this: we were going to be required to install this piece in a gallery. Where this makes sense I don't know, the idea of installing something that is deliberately non-permanent in an archival space, but I decided to run with it. Much hemming and hawing and intellectual torture ensued. I had ideas, with themes, but they seemed like tacky metaphors for what I was trying to say. It was a problem I'd never encountered before. There were two things I knew for sure: I wanted to talk about the passing of empires and the power of conquest, and I wanted to tell a story.

The gallery we were to install in was in a state of flux. It had been home for the last week to a drawing installation, the walls covered with intricate mural work. I had done a similar installation in that space last year, and as these students were now doing I had been required to paint over my work and clean up the walls for the next show moving into that space. It struck me at that time that the work I was painting over would forever be in that wall, and the thought returned when I saw these students covering up their work. I realized that empires used to work in much the same way, the conquering force covering up existing power structures with its own imposed religion, social mores, and language. The new power builds on top of the infrastructure of the old, and when it is conquered the new empire does the same. History is built in layers, and our gallery was just such a conquered space.

So I moved in and placed my own ideas on that wall. At the end of this week, it will be painted over and will join the rest of the work entombed in that wall. This photo might be the only record that it ever existed. But it has already changed the way others think about that space, and even when it has slipped out of our range of perception that philosophy will impact the work that follows it. No longer a power unto itself, simply a support, a victim of the weekly iconoclasm inherent in the university gallery.

I met a traveller from an antique land
Who said: Two vast and trunkless legs of stone
Stand in the desart. Near them, on the sand,
Half sunk, a shattered visage lies, whose frown,
And wrinkled lip, and sneer of cold command,
Tell that its sculptor well those passions read
Which yet survive, stamped on these lifeless things,
The hand that mocked them and the heart that fed:
And on the pedestal these words appear:
"My name is Ozymandias, king of kings:
Look on my works, ye Mighty, and despair!"
Nothing beside remains. Round the decay
Of that colossal wreck, boundless and bare
The lone and level sands stretch far away.
- Percy Bysshe Shelley
Posted by Unknown at 13:39 No comments:

Another Year, Another Pencil

Well, here we are. It's 2013, school is back in full swing and the human has once more successfully dodged the apocalypse (or 'alpacalypse', as one meme I saw claimed. Apparently South American camelids are an intergalactic threat. Who knew?) Over the course of the holidays I seem to have misplaced my favourite drawing pen, and am currently having to make-do with a mechanical pencil, which am enjoying immensely.

This year is shaping up to be something special. I dedicated my holiday time this year to stories. I wanted to return to school saturated with narrative and overflowing with ideas. With a lot of driving time on my hands (the length of British Columbia twice, in what looks a lot like Hell frozen over), I snagged some audiobooks and over the course of several days absorbed Homer's The Odyssey and Neil Gaiman's Neverwhere. For a young man driving home for the first time through miles upon miles of wild, deadly, beautiful country, The Odyssey was a glorious and compelling journey. And for someone who likes to imagine that, perhaps, there's more to this world than what meets our eye when we glance up from our cellphones, Neverwhere was a treat. I went on to read through Grant Morrison's Final Crisis, which has in the past defeated me, and to re-read Mark Waid's iconic Kingdom Come, both of which reinforced a lesson I learned long ago: when you pick up a comic, always read the introduction. These were followed shortly by Scott McCloud's academic masterpiece Understanding Comics, a text I thoroughly enjoyed that was rather a long time coming. Finally, I read Tolkien's translation of Sir Gawain and the Green Knight before picking up and digging into my friend Jason Tondro's Superheroes of The Round Table, which I will recommend to anyone even remotely interested in the ways Arthurian myth has influenced the realm of comics.

And so it was exactly what I wanted it to be, a holiday filled with imagination and wonder and adventure. I read, and I wrote, and I drew, and I gamed, and I consumed large quantities of home-brewed black coffee and cookies. And to top it off, I was offered two sizable illustration commissions which I had to turn down due to school. If there's one thing that bothers me, it's turning down jobs because I need to get a degree that will help me get jobs. However, anyone wanting to kibosh my school career should approach me at Comicon this year and offer me a job, because if that happens I might just drop this degree on its face and go freelance.