Daily Sketch...sort of: A Comic Compiled

This has been a labour of love. And war. And late nights.

About a month and a half ago I had the sort of epiphany art students have. So, not the kind of epiphany that involves you going, "I should totally put spikes on that sword! Dude." I'm too far gone for that. No, this revelation flashed into my head containing words like "support", "concept", "sequential narrative", and "spatial freedom". I've had ideas for comics running around my head for years now. I blame whoever got me into tabletop gaming *coughbriancough*, where I discover the term backstory and decided that for me that meant writing a short novel to explain where my character came from, what war his father had died in, and what his mother was eating while she was pregnant. I'd made attempts at turning these stories into outlines and the outlines into scripts, and most of them are coming along rather well. Where I got stuck was turning script into comic page. I discovered with chagrin that I had no idea where to start in the process of telling a visual story. I began poring over books written by Will Eisner in an attempt to better understand. As art school's critical theory took me over by osmosis I started reading comics more analytically, studying the patterns in art and sequence and loving the medium ever more intensely. Most recently I had Scott McCloud's Understanding Comics recommended to me by my friend Professor Jason Tondro ("Doctor Comics"), and it blew my world wide open. I knuckled down at the beginning of the year determined to make my comics a reality, but soon ran into my same old blocks and lost motivation. Then there was the epiphany.

I was running into the edge of the page. All caught up in mapping out my panels and page layouts, I had lost sight of the linear nature of the narrative I was endeavouring to spin. With no real concept of which images need to supersede each other to tell an effective story, I was being held captive within the borders of my 11x14" sketchbook, trapped on a rectangular page. The thought hit me while I was looking for a reasonably-priced 3-hole punch at Wal-mart (clearly there is no such thing) and came face-to-face with a value pack of adding machine paper. Almost three inches wide, three rolls to a pack, $3.99...and nearly limitless horizontal spatial freedom. I snatched it off the shelf, paid, and made my way back to the studio. I had been working in my sketchbook for five hours on an introductory section of narrative; two hours later that same section and more was laid out six feet long in stark red and black ink, and I was (if you'll pardon a pun) on a roll. 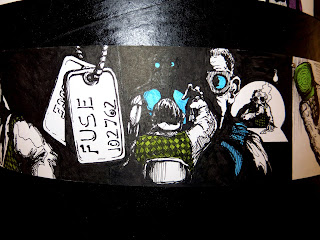 The rest is history. The format I discovered isn't practical for publication; in fact it's one of the only times you'll hear me say a comic is better suited to the digital form than physical reading (it's long and unwieldy as paper, but digitally it would work well as a perpetual-scroll file on a tablet). What it is the perfect brainstorming tool. It's taken me out of the rectangular form that was holding me back, and allowed to play. I won't claim to me a masterful storyteller by any stretch...yet. But inch by inch I'm coming to a better understanding of how sequences of imagery can be used to effectively tell a story, and it's liberating. I'm doing what I set out to do, and that always has and will be a beautiful feeling.

A few weeks back our class was tasked with creating a project for gallery presentation, and I sat down to the task of adding as much as I could to my comic strip before the deadline. Presented with the challenge of how to display something of this nature in a gallery space I did what art students do best and though outside the box/page/strip. I'm a traditionalist; I love looking backwards and paying my respects to old ways of doing things. My wandering imagination landed on Trajan's Column in Rome, a 125 ft. stone shaft wound about with a continuous narrative frieze carved in bas relief. It tells the story of a great victory won by the Emperor Trajan, a monument to days gone by and a long abandoned form of storytelling. But it worked; the columnar form proved to be the ideal way for me to present my comic strip while grounding the piece as a whole conceptually in the 2nd c. BCE. Perfect. 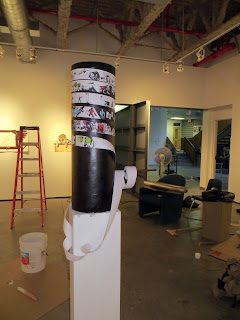 I finished installing the piece on its plinth in the gallery about two hours ago. The story is far from over. Far. Someday I'm gonna fill an entire gallery with these rolls, more inkwork than you can shake a stick at. But it is not this day; this day I am simply filled with pride at what I've accomplished, and I will sleep well tonight in the knowledge that I have a foothold in the realm of comics. As stated on the dowel that currently holds a blank roll of future story, To Be Continued... 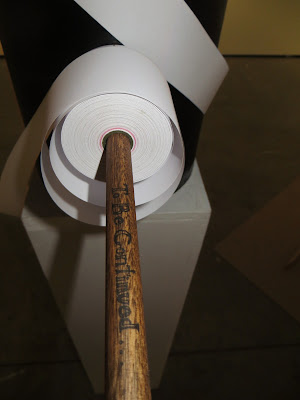 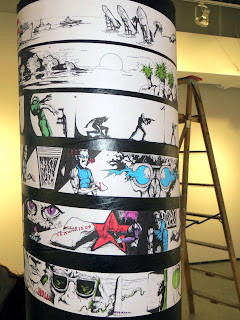 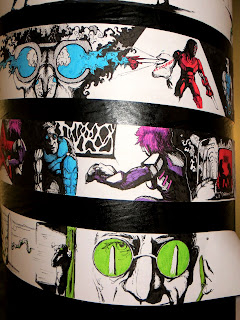 A Thousand Stories, Yet One

I had the privilege this morning of sitting down with a group of illustrators over coffee and just letting our mouths and pencils run in various directions. It was, I must say, the most fun I have had in rather a long time. I have a new Wednesday morning tradition, I think. There was a TV on the wall hooked up to a character randomizer, giving us descriptions like "nervous, jealous, private detective, may or may not be a viking", at which point we'd all turn over a new leaf, set pencil to paper and go about extracting our version of this character from our imaginations. Tastes around the table ranged from cartooning to concept art, and the results of this exercise were a real pleasure to behold. I'm looking forward to these weeks to come, and the opportunity to foster connections in this newly discovered community.

I've started writing a lot for www.comicvine.com , an endeavour that is proving to be quite an adventure. After much reading and poking about I discovered that their wiki pages could, well, use a little help. For a crowd that passionate about reading, the grammar on that site is atrocious sometimes. So I've applied myself to editing, and what a rush it is! I love researching my favourite creators and learning the little ins and outs of their careers. I've also found the Vine to be a good forum for pouring out my thoughts on comics and having people listen, engage, and dialogue with me. There's a lot to talk about in the realm of comics; there always will be. I hope to be able to bring a more academic flavour to some of the Vine's discussions. I've also started a somewhat sporadic comics review, just opinions on what I'm reading in a given week. I posted one of them up here on February 22nd, but like my Daily Sketch entries it's a challenge to keep them coming on any sort of regular basis. Should be another one coming up shortly; stay tuned. until then, you can check out my Comicvine writings at http://www.comicvine.com/myvine/vitaeleous/blog/, keep yourself entertained.

I finished reading a book today that's given me a lot to think on; Jason Tondro's Superheroes of the Round Table, a brilliant account of the various and sundry influences of heroic romance on the superhero genre. Primarily focused on Arthurian legend and the ways it has entered the world of comics, the book changed the way I think about my own narratives, the ways I play with existing events and literature. I've started writing more recently, started a list of story ideas in the back pages of my sketchbook. When those ideas in the back run into the sketches in the front, I guess it'll be time to find a new book. Hopefully by then I'll have some much more full-bodied stories to play with. I seriously considered spilling coffee on the book so the school library would let me keep it. It really was a great read, but better than that has been the opportunity to actually get in touch with Jason online over the past few months. I'd followed his blog for a while (you can find him writing under the monicker "Doctor Comics"), and I approached him a while back wondering if he'd have the time to critique an essay I'd written. He has since become a true academic inspiration to me, someone I can bounce thesis ideas off of and go to with questions about interpretation, and more recently someone to collaborate with in an artistic capacity. Thanks to Jason I've started to explain to people that my university career is "a major in Illustration with minors in English and Art History being used as an academic springboard for comics scholarship." My hat goes off to Mr. Tondro; thank you sir.

And now I must return to work, an essay in fact. If it turns out, maybe I'll toss it up here for the rest of you (however many "you" are; I have no idea who reads this). So au revoir. And here's the result of this morning's coffee. Don't ask what's going on in the top corner, I haven't a clue.

"...all experience - all literature - is to be swilled, blended, mixed in a cup and drank until we are a creature of many thousand hands, multi-colored eyes, a thousand stories and infinite shape, yet one."
-Jason Tondro 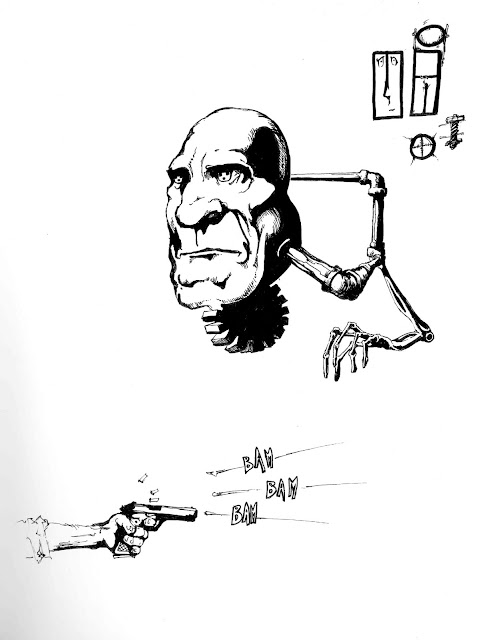