Listen up, you mugs! I've neglected my duty to this project for far too long, and now with only four days remaining and $26,000 to go it's high time I remedied that.

Broken Frontier: The Boldest Comics Anthology in the Galaxy
by Tyler & Wendy Chin-Tanner

Every once in a while a really worthwhile, well-assembled, creator-owned comics project comes along, and you can tell by looking at the roster of writers and artists who have come together to make it happen that it's gonna kick some serious ass. The Broken Frontier Anthology is that project. Now, I may a touch biased because that roster includes some of my own friends and colleagues - like Sacred & Sequential's own A. David Lewis, Canadian sensation Salgood Sam, and the SVA's phenomenally skilled and cordial Nathan Fox - but that really just makes me all the more confident in the quality of the comics that Broken Frontier is collecting in this edition.

This anthology has come together as a collaboration between two proponents of creator-owned comics: the comics news site Broken Frontier, headed by editor-in-chief and writer Frederik Hautain, and Tyler and Wendy Chin-Tanner's publishing company A Wave Blue World, which has been putting out comics without sucking the life out of their cartoonists' IPs since 2005. It's a deadly team. Hautain has assembled a crew of comics makers possessed of a slew of untold stories that they've been dying to realize and offered them the means to do exactly that. All they need now is a little...push. That's where you come in.

And really, could you have asked for a more gorgeous volume to grace your shelves than this? Robbi Rodriguez's (Spider Gwen, FBP) cover for this edition is stunning, and is further complemented by a Farel Dalrymple bookplate and exclusive prints from PJ Holden (Judge Dredd), Robert Sammelin (Cimarronin, Sleepy Hollow), and Toby Cypress (Rodd Racer). After that, let's not leave out names like Greg Pak (Action Comics), Tom Raney (Stormwatch, Avengers Academy), Noah Van Sciver (Blammo, Saint Cole), Steve Orlando (Midnighter), Cullen Bunn (The Sixth Gun, Magneto), Alison Sampson (Genesis, Mad Max: Fury Road), and Box Brown (Andre the Giant). The book promises to be packed full of stories that explore the unknown, from the edges of the universe to the wilds of Alaska in a host of genres from steampunk to sci-fi to fantasy (with Vikings!) and all the cracks in between. 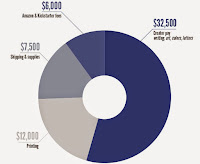 But enough of me rambling at you. Go check out the campaign at br.oken.fr/anthology. Take a read through Bleeding Cool's promotion of the anthology. And get yourself over to Reddit, where the team's doing an AMA session through to the campaign's close on Friday, by which point you've hopefully realized that you didn't need to eat next month anyway and backed this project all the way.

One more thought to leave you with. Something that warms the cockles of my heart is seeing anthology projects that buck up and pay their contributors properly for their work. This project seems to be doing right by its writers and artists and that, I think, is something worth putting a little cash towards.